Methamphetamine abuse is a serious and relatively new threat in Indian Country. The fight against methamphetamines will be staged on many fronts. Education, prevention, and treatment are all necessary components for success against meth.

According to Methamphetamine in Indian Country Tool Kit

Methamphetamine is an American problem, infiltrating and devastating our communities throughout the Untied States. Unfortunately, however, this drug has disproportionately devastated Native American Tribal Communities (there are over 560 independent sovereign Tribal governments and communities in the United States). Mexican drug cartels have been purposefully targeting rural Native American Reservations, both for the sale of meth and as distribution hubs (over 70% of Meth is now estimated to be smuggled from Mexico). Native Americans now experience the highest meth usage rates of any ethnic group in the nation. 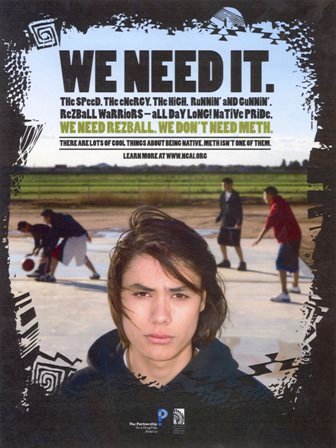 Methamphetamine: Also known as meth, crank, speed, ice or crystal is a central nervous system stimulant. People ingest meth by taking it in pill form, smoking or snorting it, or injecting it.

The precursor materials used to make meth include pseudoephedrine, acetone, lithium batteries and anhydrous ammonia. These products are widely available in drug and grocery stores, hardware and feed stories and on the internet.

This is a man-made, highly volatile and addictive synthetic drug that can be produced in homes, cars, hotel rooms and has no respect for age, race, ethnicity, class or geography. A Meth lab can be as close as the last hotel you stayed in, your neighbor's back yard, their bathtub, or in the car trunk of the car you last passed on the highway.

There are two main types of clandestine methamphetamine labs. One is the “super” lab — a large, highly organized lab, the other type is small-scale labs, often called “mom and pop” setups.

How Much of a Problem are Illegal Meth Labs

For every pound of meth cooked, there are six or more pounds of hazardous materials or chemicals produced. Surfaces in the meth lab and surroundings may become contaminated with this hazardous waste.

These hazardous materials are usually left on the premises or dumped down local septic systems. Often they are buried in backyards, open spaces, in ditches along roadways or poured down drains into the municipal sewer systems.

To address in part this growing environmental problem and the need for public health protection, Office of Environmental Health Hazard Assessment (OEHHA) of the United States has developed two types of chemical-specific information documents.

Other public health hazards that result from crystal meth production are the fact that toxic waste dumped into trashcans and commercial dumpsters could put sanitation workers at risk and water used to put out lab fires can also wash toxic chemicals into sewers.

Clean up of an Illegal Meth Lab

It is really important that members of the public do not attempt to clean up abandoned drug labs; in fact, the best thing to do is to contact the police to send in their forensic team to assess and evaluate. They will probably appoint a federal or state licensed decontamination contractor. These contractors have hazardous materials training and know how to decontaminate meth lab properties in a safe and sustainable way.